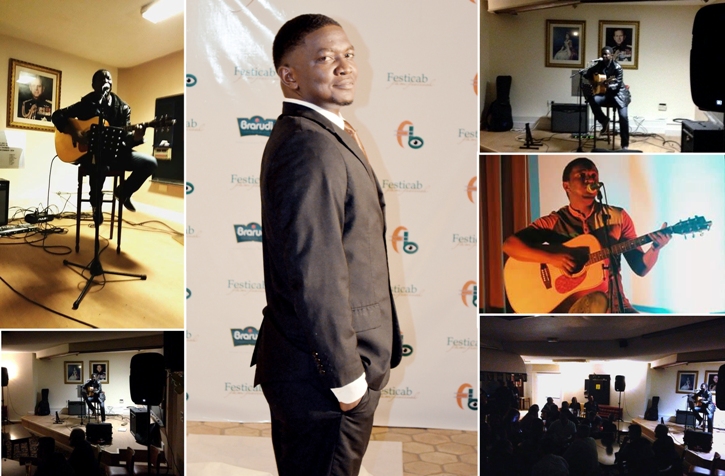 Francis Muhire is a young Burundian artist who is known in various platforms in Bujumbura.  From acting, to singing, to managing Festicab, Muhire is far from the average artist. His studies have taken him to the UK but he took his Burundian spirit with him as he is representing our culture in his various gigs.

Akeza: Who is Muhire the artists; his journey?

Muhire: It is never easy to talk about myself; I’ll just try toput it as simple as I can. My name is Francis Muhire. My journey with music started in the nineties when I was a child, back in Kamenge. I grew up in the middle of a lot of musical influences; from Congolese “Sebene” to bob Marley and Lucky Dube’s reggae; passing though zouk music by Kassav from the West Indies. I can’t also forget all the traditional Burundian music plus the unforgettable Canjo Amissi with his guitar, and all the others that came.

Early 2000, I joined the first musical band at “Centre Jeunes Kamenge”.I started teaching drums as a volunteer animator and learnt to play some guitar as well. After my secondary school, a real professional band hired me as a drummer. That is when I met Jean Marie Nibigirwe a.k.a Budi, a great guitar player and musician. Meeting him allowed me to discover some other genres of music like Blues, jazz and afro-fusion. That’s how I found myself in music.

Akeza: Most artists don’t manage to juggle studies and their passion but your case is different.How do you manage?

Muhire: For me, both studies and music are my passions. I like getting knowledge, challenging my brain and my intellectual. It’s a way of reaching a certain self-accomplishment. But also, I realized that music is just naturally linked to studies. I had my first musical performances at school. Also paid a part of my university tuition with the money I earned from the musical gigs I had on weekends in different bars of Bujumbura.

Four years later, searching a link between my graduation studies and the music, I decided to base my graduation thesis on ‘Intellectual  Property  Law’ as I was doing law studies.

Akeza: Only few artists play your kind of music, how can you describe  your music?

Muhire: I’d describe my music as a search for a combination between Burundian local rhythm and modern or contemporary music. I think that the only way to get internationally saleable music products from Burundi is to adapt our traditional rhythms to the modern technologies. I wish I could develop a little bit more on that though, maybe later in some other interview.

Akeza: You’ve got some gigs in the UK. Do you play the same kind of music and what feedback are you are getting?

Muhire: I came to UK for studying purposes. I got a UK government Scholarship called “Chevening Scholarship’’ and oriented my focus on a Master in International Commercial and Business Law (LLM). During my first week at Bangor University, there was a rock concert at the student accommodation where I live. I approached the event manager, Gary Hughes, and told him I play some guitar and had also recorded some songs. I sent him some of my songs through his Facebook. Few days after, he asked me if I was going to be available throughout the year in UK. I said yes. Next day, he came up with some gigs dates. And that is how it all started.

I play my own songs (Ngwino Unyegere, Musorewe, Sangwe, Mawe Ndagiye,…) and mix them with some other covers of different known and classic songs. The feedback is really interesting as they are not used to African music rhythms. So every gig I do is a special one for them.

Akeza: Are you planning to pursue your passion or will we have to forget about Muhire the artist after your studies?

Muhire: I am very conscious that it is not an easy task to make a decent living out of music only. Music demands a lot of efforts and hard work; but mostly, it also asks for something that is out of control: chance. And this is not only a Burundian reality, but it’s a worldwide reality. But music is a passion. And it’s a passion that does not need to be lived only publicly on a stage or through Medias. It’s passion you can carry with you, in your interior, and share it around you with friends and family.