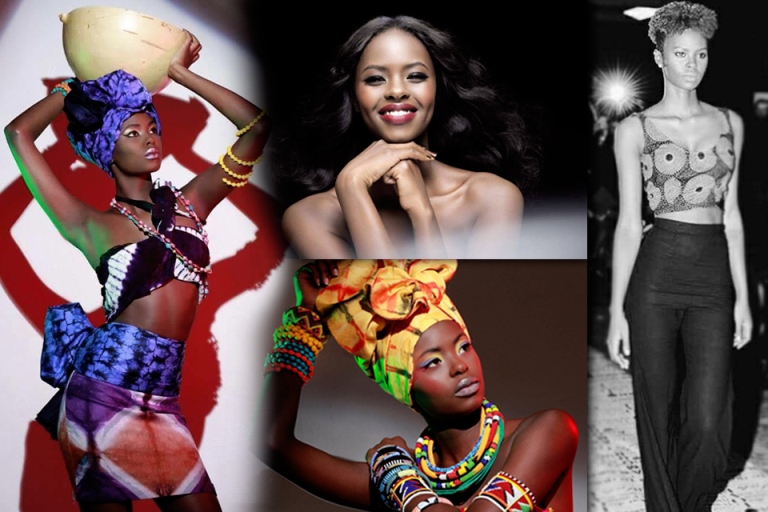 Akeza.net  is showcasing Burundian models evolving abroad. The fashion world is a small closed circle, not easily accessible to black models, especially when they come straight from Africa. Nevertheless, some Burundian models manage to make their way to the steps of the most popular runways.

We have met an ambitious woman who goes by the name Nobelle Muvyeyi. She happens to be a student, a mother and a model.  Here is her story…

Akeza.net: When did you start modeling?

Nobelle:  I started modeling in 2012; it was right after I moved to Stockholm that I decided that I should give it a try.  I saw that they were casting for Stockholm Fashion Week; I applied and got the gig. That’s how it all began.

Akeza.net: Would you like to make modeling a career?

Nobelle:   Had you asked me that question for like 2 years ago, the answer would be YES! But now I got other priorities, I’m a mother now .I can’t be travelling a lot and be away from my family for so long ,so no I wouldn’t make modeling a career.

Akeza.net: How do you manage modeling, being a mother and studies?

Nobelle:  How I manage the three things: well it is definitely challenging. But I am lucky to have a good partner that supports me. He‘s the one that always takes care of our son while I am away.

Akeza.net: What are the big fashion shows that you have yet walked for?

Nobelle:   That would probably be the L’Oreal Paris show; I also have worked for a renowned British Designer called Stephen Arthur.

Akeza.net: What is the hardest thing in the world of modeling?

Nobelle: I think the hardest thing for a black model is to really make it in the industry and book big gigs because most of the time they are looking for that Scandinavian look (blue eyes and Blond hair) and obviously that was not me so it’s been a real challenge for me. The other hard thing, I would probably say is the long days. By long days, I mean that it is many hours of preparation, and shooting…

Akeza.net: who is your favorite model?

Nobelle: My favorite model of all time is definitely Naomi Campbell, I adore her, and the fact that she is in her forties and still slaying is just amazing to me.

Akeza.net: if u were not a model, you would be…?

Nobelle: a shoe designer. I love shoes and would love to design my own shoes one day.

Akeza.net: And what about your future projects?

Nobelle:  I’ve dreamt of starting my own modeling school in Burundi for a while but I’m afraid that will have to wait until the situation in Burundi gets better.

Akeza.net: which piece of advice would you give to young Burundians who aspire the same passion?

Nobelle:  The advice I would give to those that want to get into the modeling world is to first of all really be careful because in this industry, if you’re not strong/smart enough, people can take advantage of you.

The second advice is: to be humble, nice and positive. Nobody want to work with a person with a bad attitude, you want to be booked again so make sure you make a good impression!

Number 3: Practice!! It’s very important to practice. You need to practice on poses in front of the mirror, you can also look for different poses in fashion magazines and so. Practicing on walk is also a good thing.