Singer David NDUWIMANA :from Burundi to Australia, the royal story of a hit maker 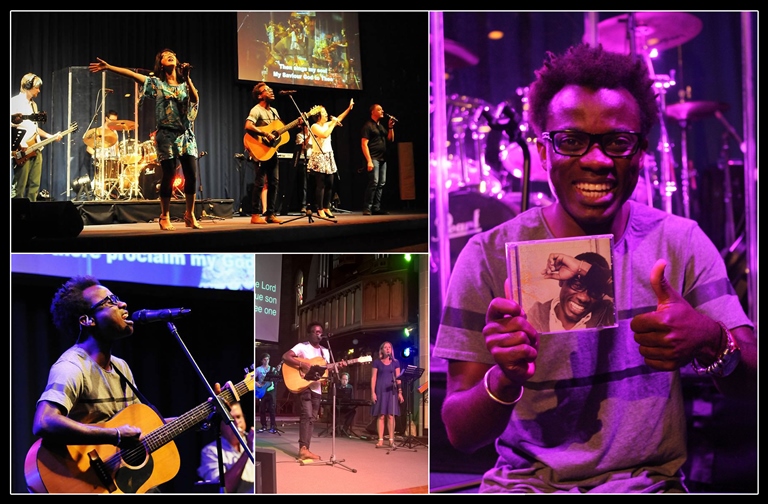 David NDUWIMANA is one of the best know Burundian musician, especially in the gospel music industry. After several years of a great musical career, he relocated to Australia where he is doing even better.

In this interview he goes back to his humble beginning, how he met his mentor Apollinaire HABONIMANA, his love relationships, how he met with Darlene Zschech … and his ongoing music career in Australia, to name just a few.

Born from a Pentecostal pastor, David is the first born among five boys and two girls, he says.

He grew up in Burundi and started his singing career at the age of six when he was attending Sunday school at the same church of Pentecost. “When I was 14 years old, I met APPOLINAIRE HABONIMANA”, he reveals. “At that time Apollinaire came to ask my parents if I could move to his place and nature me musically”, David added.

At 17, he started writing songs as a joke and ended up putting those songs together and made his first album NIWEWE NIZIGIRA . “At my biggest surprise, Yesu Niwewe Nizigira became a hit and there I started to realize that I could do better”, he says.

After he became one of the biggest gospel music artists in Burundi, David eventually moved to Australia a few years ago where he continued his music career.

On the difference between now and then David…

With a slight smile on his face he says “yeah, of course”

He opens up and says coaching in music is way too different from what he used to get.

“In Australia things are done professionally. Since music is my passion, when I arrived here, I had to join a class of music. During my course, I did music performance, song writing, music theory, and music business”. He furthermore adds that not only these new skills will help him embrace the Australian way of doing music but also help him to move on the next level in his music career.

On his relationship that didn’t go as expected…

He laughs and pedals back when he was still in SHEMEZA MUSIC where he was natured musically. “I met cassy, an Australian beautiful girl when we were touring East Africa as Shemeza Music” David narrates. She came to Burundi with a team and they were ministering to Orphans and that’s where I came to know Cassy and that was it. Our love grew faster and we could spend more time together and this fuelled our love to growing so fast. Days went fast and the love kept burning hence we started preparing our wedding. However to cut the long story short, it didn’t go the way we both expected”, he points out.

He stretches himself and laughs. “At this current period I have to say that it’s not easy after the previous relationship that I was in. I have decided to take my time”, he says. On the other hand he promises that in case of something different he will let his fans and others know about it. “Now there is no Mrs lucky”, he concludes.

On how he met with Darlene Zschech …

“Here in Australia, we annually have a worship leader’s workshop. It’s a very huge event here. The event itself gathers around 300 worship leaders. The 2013 Worship Central Australia was held at our church and Darlene was the guest speaker and I was the worship leader. At that particular moment when I had led the worship, she came on the stage and there she called me, asked my names and held me, then prayed for me. The rest is history”

With a happy face, David goes on and reveals that by the time he met Darlene he had begun recording his album at GOSFORD in her studio called GROVE RECORDING STUDIO.

On his new album…

When I got here, everything was somehow new to me. Not only I was new in this country but also the culture itself was. BY MY SIDE album is more of a prayer I made to God because when I landed here I realised that it was easy to go astray from the ways of the Lord, so I recorded this album as a prayer asking God to be by my side regardless of what I was or will go through. Not only God manifested himself to me but also sealed it by directing my path to the right church in my community.

The By My Side Album was purely done in English unlike the previous ones; this is also like an introduction of me to t the Australian gospel industry.

As he cheers up, he also mentions that he has not forgotten Kirundi (laughter).

On the relationship between him and his fans in Burundi…

I have a very good relationship with them. It’s a challenge to keep in touch due to various reasons but I treasure them so much and counting to maintain them jealously. Today if you see me here it’s all because of my fans. They are my encouragement, they supported me… the list is too long.

Are there some activities we should expect soon?

Along our face to face interview he looked calm and happy as he discloses some of the main activities that this year awaits for him. “Actually this year my calendar looks busier than last year”, he points out.

. However on top of these invitations, David adds that he is planning to have a cultural blended concert in august between the two cultures.

On the crisis in Burundi …

“In this difficult time that our country Burundi is going through, people should keep calm, not assimilate themselves, treasure unity”, he calls on.

More so he calls on people to remember one another in their prayers and think after all these bitter moments the country is going through, who will you be?

“Last but not least a very big thanks to people from both Burundi and Australia and fans who support me morally and keep me in their prayers”, he says.

The gospel artist promised that by this year his website will be fully functioning and people will be able to follow updates.