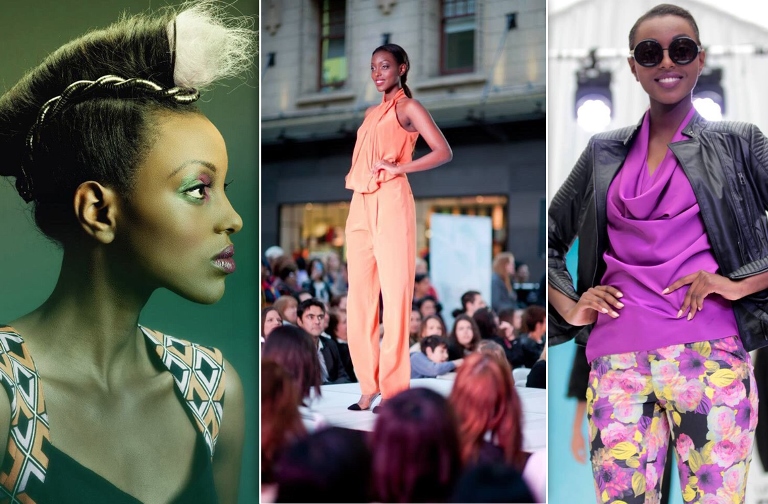 Akeza.net is showcasing burundian models evolving abroad. The fashion world is a small closed circle, not easily accessible to black models, especially when they come straight from Africa. Nevertheless, some Burundian models manage to make their way to the steps of the most popular runways.

To begin, we met Kezimana Liesse, established in Australia

Akeza.net: When did you start modeling?

Liesse Kezimana: I started modeling in 2011 after winning the contest of Miss Africa Australia, where I live since 2007.

Akeza.net: What goal did you have in mind when you got started in this field?

Liesse Kezimana: I wanted to represent my country and African beauty.

Akeza.net: What are the problems that you face?

Liesse Kezimana: I usually do not find shoes that fit me, literally. From time to time, I find myself with shoes of bigger size or smaller than mine, often not mine.

Akeza.net: Would you like to make a career out of modeling?

Liesse Kezimana: I would like to, but one day I’ll get married and I do not think I could handle both.

Akeza.net: What advice would you give to young Burundians who have the same passion as you?

Liesse Kezimana: Those who have the same passion for modeling, I would tell them to take the opportunity when it presents itself and have fun because you only live once.

Akeza.net: What are the major fashion shows that you have attended?

Liesse Kezimana: The fashion shows that I have attended include: Adelaide Fashion Festival, Melbourne Cup, Myer opening (Myer is a well-known commercial center in Australia which just got renovated), Clipsal (it is held every year with car racing). Back in 2014, I won the competition Face of Africa Australia.

Previous PostGaël Bigirimana wants to play for Burundi, but fears for his safety Next PostBerco Stars won the tournament for peace in DRC